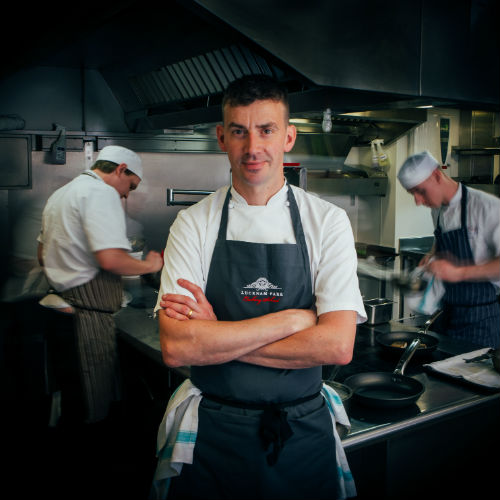 Hywel Jones, Executive Chef at Lucknam Park Hotel will be joining The Classroom for a one-night-only takeover of the restaurant. Don't miss this exclusive opportunity to taste this unique menu from this Michelin Star Chef.

Hywel Jones, Executive Chef at The Park restaurant and The Brasserie at Lucknam Park Hotel & Spa will be joining The Classroom for a one-night-only takeover of the restaurant. Don't miss this exclusive opportunity to taste this unique menu from this Michelin Star Chef.

Hywel started his career with David Nichols at The Royal Garden and then moved on to work as Chef de Partie in two Michelin 3-star establishments; Chez Nico at 90 and Marco Pierre White. He then furthered his skills as junior Sous Chef at Michelin starred Le Soufflé. From there he went on to earn his first Michelin star at Foliage restaurant at Mandarin Oriental Hyde Park where he was Head Chef for five years, prior to joining the Pharmacy Restaurant in Notting Hill as Executive Chef. In 2004 Hywel joined Lucknam Park Hotel and Spa, and in 2006 was awarded a Michelin Star. Awarded Hotel Chef of the Year at the 2007 Hotel Catey Awards, Hywel has created superb menus in both the Michelin starred restaurant The Park and more recently in the stylish and contemporary dining experience of The Brasserie. Where possible, Hywel uses locally sourced ingredients including herbs from Lucknam Park’s own extensive herb garden. He has built a personal relationship with his local suppliers ensuring high quality ingredients that are always reflective of the season. In November 2012, under the guidance of Hywel, the hotel opened a brand new Cookery School offering a wide range of courses for those who enjoy cooking. Courses are very diverse, ranging from Street Food of India to Great British Food, Seasonal Cookery, half day Children’s courses and An Evening with Hywel, where Hywel will cook and talk whilst preparing a five course menu.

The event is now fully booked.

For bookings for Hywel Jones at The Classroom a 50% deposit will be required on booking.

View the menu for Hywel Jones at The Classroom – 26th May and book now.